Do you remember what you ate for breakfast two days ago? I most certainly don’t. We tend to be forgetful, whether it’s a simple matter such as what we ate for breakfast a few days ago or something more important such as a birthday or big event.

In this passage, we find out that Naomi was forgetful too. In her grief and bitterness, she couldn’t remember the steady truth that God provides and that He is faithful. She spoke in previous chapters of bitterness and loss. She said in Ruth 1:13, “the hand of the Lord has gone out against me.” and then in verse 21, “I went away full, and the Lord has brought me back empty.”

But when Ruth returned from the field and brings food, enough to feed them for weeks, and spoke of the kindness she received from Boaz, Naomi’s speech changed radically.

“May he be blessed by the Lord, whose kindness has not forsaken the living or the dead!” (2:20) This simple act of providence from God reminded her of His faithfulness which she had forgotten in the midst of suffering.

But she is not the only one who has forgotten and doubted God before. Israel, when they had just escaped slavery in Egypt after a short while began complaining and wanted to go back even when God specifically said that He was taking them to a land they’d be free and prosperous in! They kept forgetting His promises and doubting His goodness.

We are no better than the people of Israel complaining in the desert, wanting to go back to slavery. We easily forget what God has done in our lives. He saved us from death, gave us new life, and made us co-heirs with Jesus (Romans 8:16-17). We are able to go to the Father and have a relationship with Him, yet so many times we forget the depth of what this all means.

And so, we must build our own ebenezers. “Ebenezer” comes from the Hebrew word ebhen hā-ʽezer, meaning “stone of help”. It’s a memorial built of stone to commemorate something that God had done. In I Samuel 7:10, Samuel builds one after God helps Israel defeat the Philistines who were tormenting them. We must do the same in our own way – write, draw, make small reminders of the kindness God has shown throughout our lives. We must continue to recognize all He has done, from the small to immeasurable acts, and rejoice, lest we forget.

Have you forgotten and doubted the goodness of God lately? Confess your doubt to Him, asking Him to remind you of His character. Have you ever made an ebenezer in order to remember something that God has done? Create one today. Some easy ways to do this are writing in a journal, painting a picture, or writing a poem or prayer to hang it on your wall. 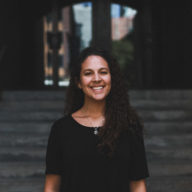