We don’t live on an island; the world is made of communities. If these communities don’t work together, they crumble. And community is an important part of what it means to be a Christian.

In the movie Ants, there’s a scene at the end where the colony of ants is in jeopardy of being wiped out. They are in a tunnel with water seeping in. And their only chance of survival is to work together. Each individual ant lifted one another on their shoulders, forming a ladder to the top. The ants at the bottom had to hold the weight of the ants above them as the water started to submerge them. If just one ant at the bottom moved, the entire ladder would’ve come crashing down, the ant colony being wiped out of existence.

In Romans 12:1-8, Paul has just explained the mercy of God and how the forgiveness of sins was offered to an undeserving people. Salvation was not given to the strong, the wise, or the best-behaved people. Rather, salvation was given to the unworthy.

In light of the mercy and kindness of God, we are to respond in faith and obedience, working together for the greatness of God’s glory. Paul opens this chapter by saying, “Present your bodies as a living sacrifice, holy and acceptable to God, which is your spiritual service (Romans 12:1).” Since we were bought by the precious blood of Christ, we don’t belong to ourselves; we belong to God. We are commanded to respect our bodies and to be mindful of how we act.

According to Paul, we are to serve others, particularly our brothers and sisters in faith. In Christ, there is only one body, but many members, and each member serves a purpose for one another (Romans 12:4-5).

Paul exhorts his Roman family to use their Spirit-born gifts to lift one another up, whether in serving, teaching, or giving. These gifts aren’t individual possessions but corporate contributions. Believers are expected to be humble and not think too highly of themselves. Pride can really hurt our community! Paul wants the members of the church to be bonded together in unity. Each believer is to have a transformed mind aligned with God’s will. If this happens, we’ll hold each other up; if it doesn’t, we’ll all come crashing down.

Take time to welcome someone who is outside of your normal group. The body of Christ not only has different gifts but different kinds of people. Take the time to meet different believers and get to know other people saved by God’s grace. 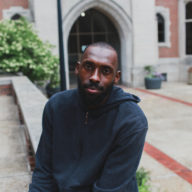