Whenever we read the news, we may start to feel overwhelmed, and maybe even a little hopeless. We ignore the realities of this world because it’s too hard, sad, or painful. There is so much death, destruction, hate, and greed. We are destroying the world we were supposed to steward.

Our world groans with the pains of hurricanes, earthquakes, floods, and wildfires. Every day, we hear of wars raging, famine spreading, and gang violence that needs to be controlled. There are suicide rates rising, and persecution towards Christians is increasing. So many horrible things happening at every corner of the world. We might be tempted to ask where God is in the midst of all this pain.

The Bible teaches that sin entered the world in the garden of Eden, and it has spread. Now, more than ever, we see the far-reaching consequences of that original sin. We see it in ourselves and in the world around us. It’s easy to feel despair or even indifference because it’s a lot. It’s easier to pretend that we aren’t affected by any of it, and just say that God is in control to avoid dealing with the sin of the world.

But we must remember, we are not in this world to avoid suffering and pursue comfort. As believers, we can’t just close our eyes in front of the injustice around us. We are not alone, we are part of the body of Christ. Being an active part of this body gives us many tools that we need in this fight against evil: community, prayer partners, accountability and support from other believers.

The battlefield can be scary, but the great news is that our God has already won the war, He is victorious! When you feel overwhelmed, alone, or have noticed that you have become numb to the suffering of others, go to the Word. As Romans 8:18 says, “…the sufferings of this present time are not worth comparing with the glory that is to be revealed to us.” There is hope in our future, even if the present doesn’t seem like it could get any better.

In times when you are afraid, remember Christ’s victory and celebrate in that. Even in a world where death is evident, there is also life coming from it. Look to the believers around you for support, and pray. Pray for the hope we have been given! 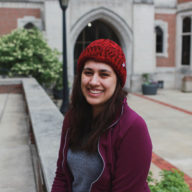