My mother still makes the bed of my childhood room in our family home each time I return to visit. The scene is the same in spite of the season, or the late hour of my arrival: “Goodnight hun, I’m glad you’re here; I made the bed for you in the attic.” I walk up the three creaky stair-flights, grope for the antique lamp, and turn it on to reveal the simple and yet caring work of my mother. Her preparation is not only a reflection of her love for me, her creation, but it is a reminder of her intentions that I would have the right space in that house.

Everything God made, He gave to its’ place; all the creatures, the stars, and later in the passage, humans. The account of Genesis of His preparation, His “bed-making” for the whole of earth’s inhabitants, is a statement of  not only His love, but His loving desire for this world to undeniably be a home.

Often overlooked, the beginning of Genesis contains intentional literary structure, similar to the disposition of certain forms of modern poetry. Underneath its contents, theologians and scholars have exposed and tried to expose meaning according to numbers like seven, a Hebrew number denoting spiritual height and patterns in repeated phrases. There is significant meaning in the strict content of the passage, but similarly, its presentation is also part of its explanation. One of these such patterns is a parallel in the six-day creative order.

On the first day of creation, God enkindles light and separates it from the darkness. The second day, He produces the sea and above it the sky, and on the third day, God forms dry land and sprouts it with vegetation. The next three days are seen to parallel the first three. Each stage that had been previously prepared begins to welcome its lead. On the fourth day, God created the celestial bodies for their luminance and, in our verses, on the fifth day, He marries the fish to their seas, the birds to their heavens, and the next day, the beasts to their fields. Each of the first three days of creation had its companion day in the second set.

The author’s intention in writing of these complimenting days of creation correlates to a simple message of God’s purpose and plan for His creation. It highlights His original proposition that all of His creatures would have a rightful place in the world. God welcomes all of creation so that every house became a home.

Are there areas in your life that God wants to welcome you and yet you refuse to go? Where is it that God has prepared a place that you need to accept as His loving-kindness? All too often I try to make my own comforts and security a priority; how can I be a part of God’s home-making for someone else? 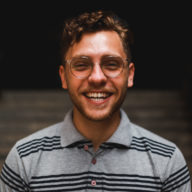